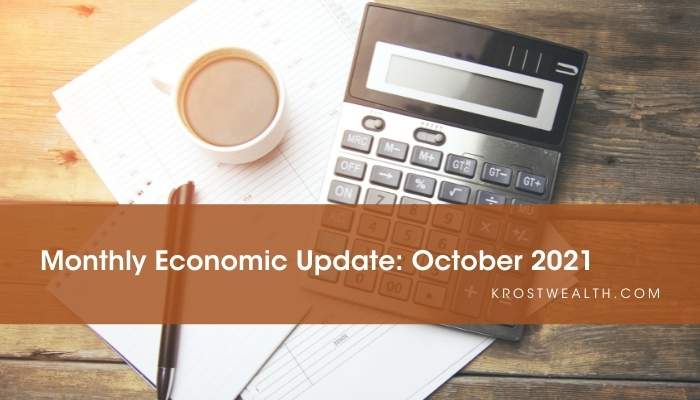 In this month’s recap: Stocks hit some turbulence, turning cautious amid slowing economic growth, and policy debate in Washington.

Investor sentiment deteriorated throughout the month. Weighing on stocks was uncertainty about the Federal Reserve Bank’s tapering plans, the fiscal and tax policy proposals being debated in Washington, and the economic growth implications of continuing supply bottlenecks.

This unease culminated in the market’s reaction to news that a large, heavily indebted property development company in China was in danger of not making its scheduled interest payments—a prospect that could lead to the company’s bankruptcy. The angst dissipated quickly as investors realized that the company’s difficulties appeared limited.

With that, the market turned its focus to the Federal Reserve’s Federal Open Market Committee meeting to learn what the Fed’s plan would be with tapering and interest rates.

Fed Chair Jerome Powell said that tapering would not begin immediately, but could start by November 2021. The markets also learned that the day is drawing closer to when interest rates may be increased. The support among Fed officials for a rate hike has increased, with half of the 18 Fed members expecting that interest rates will be higher by the close of next year versus just seven who thought so in June.2,3,4

Just as the market appeared to settle down, volatility picked up again as the 10-year Treasury yield climbed in the final trading days of the month. Technology and other high-growth stocks felt the bump in yields, which added to losses as the month closed.

What Investors May Be Talking About in October

Over the next several weeks, expect more talk about Jerome Powell, whose four-year term as Fed Chair ends in February 2022.

A survey earlier this year indicated that Wall Street overwhelmingly believed Powell would be renominated to a second term by President Biden, with even a greater share of respondents expressing the view that he deserved a second term. Biden is expected to act soon, knowing that any nomination needs to undergo a Senate confirmation process.6

But Powell’s prospects for being renominated appear to be less certain today.

During an appearance by Powell before the Senate Banking Committee in September, a prominent committee member stated that she would not support Powell’s nomination. Other senators have voiced criticisms of Powell, though they have not publicly declared their opposition.

Biden is not obligated to nominate Powell. For now, Powell continues to enjoy bipartisan support in the Senate for a second term, but if resistance to his renomination increases and throws a second term into doubt, it could have an unsettling impact on the markets.

Tip of the Month

Collaboration among investment, legal, and accounting professionals may make a big difference in the scope and execution of a financial strategy.

The MSCI-EAFE Index slipped 3.18 percent in September, fighting the headwinds of a tightening monetary policy in Europe, multiple economic challenges in China, and political uncertainty in Germany and Japan.7

Employment: Employers added 235,000 new jobs in August, below the consensus expectation of 720,000. The unemployment rate dipped to 5.2 percent, while wages increased 4.3 percent year-over-year.11

Retail Sales: Retail sales posted a 0.7 percent gain, surprising economists who had expected a decline due to the Delta variant. Excluding autos, which fell 3.6 percent for the month primarily due to chip shortages, retail sales rose 1.8 percent.12

Durable Goods Orders:  Orders for goods designed to last three years or more climbed 1.8 percent in August, the biggest increase since May.18

Quote of the Month

At the conclusion of its two-day meeting on September 22, the Federal Open Market Committee indicated that the Fed was ready to begin tapering its monthly bond purchase program, likely starting in November 2021. Fed Chair Powell thought that the tapering would conclude around mid-next year.

Interest rates may also move higher sooner than expected, as a survey of Fed officials now shows half believe that rates will be higher by the end of 2022.19

The market indexes discussed are unmanaged and generally considered representative of their respective markets. Individuals cannot directly invest in unmanaged indexes. Past performance does not guarantee future results. U.S. Treasury Notes are guaranteed by the federal government as to the timely payment of principal and interest. However, if you sell a Treasury Note prior to maturity, it may be worth more or less than the original price paid.

Tom’s mother has four children. Each was born exactly one year and one month apart from the previous child. The first she named April, the second she named May, the third she named June.  What did she name her fourth child?

LAST MONTH’S RIDDLE: What do the words Potato, Voodoo, Grammar, Revive and Banana have in common?
ANSWER: All five words read the same backwards when their first letter is moved to the last position. (Ex: Banana … move “b” to the end position to spell “ananab”. Ananab = Banana spelled backwards.).>/span>

Know someone who could use information like this?
Please feel free to send us their contact information via phone or email. (Don’t worry – we’ll request their permission before adding them to our mailing list.)

This material was prepared by MarketingPro, Inc., and does not necessarily represent the views of the presenting party, nor their affiliates. The information herein has been derived from sources believed to be accurate. Please note – investing involves risk, and past performance is no guarantee of future results. Investments will fluctuate and when redeemed may be worth more or less than when originally invested. This information should not be construed as investment, tax or legal advice and may not be relied on for the purpose of avoiding any Federal tax penalty. This is neither a solicitation nor recommendation to purchase or sell any investment or insurance product or service, and should not be relied upon as such. All market indices discussed are unmanaged and are not illustrative of any particular investment. Indices do not incur management fees, costs, or expenses. Investors cannot invest directly in indices. All economic and performance data is historical and not indicative of future results. The Dow Jones Industrial Average is a price-weighted index of 30 actively traded blue-chip stocks. The NASDAQ Composite Index is a market-weighted index of all over-the-counter common stocks traded on the National Association of Securities Dealers Automated Quotation System. The Standard & Poor’s 500 (S&P 500) is a market-cap weighted index composed of the common stocks of 500 leading companies in leading industries of the U.S. economy. The Russell 2000 Index measures the performance of the small-cap segment of the U.S. equity universe. The CBOE Volatility Index® (VIX®) is a key measure of market expectations of near-term volatility conveyed by S&P 500 stock index option prices. NYSE Group, Inc. (NYSE:NYX) operates two securities exchanges: the New York Stock Exchange (the “NYSE”) and NYSE Arca (formerly known as the Archipelago Exchange, or ArcaEx®, and the Pacific Exchange). NYSE Group is a leading provider of securities listing, trading and market data products and services. The New York Mercantile Exchange, Inc. (NYMEX) is the world’s largest physical commodity futures exchange and the preeminent trading forum for energy and precious metals, with trading conducted through two divisions – the NYMEX Division, home to the energy, platinum, and palladium markets, and the COMEX Division, on which all other metals trade. The SSE Composite Index is an index of all stocks (A shares and B shares) that are traded at the Shanghai Stock Exchange. The CAC-40 Index is a narrow-based, modified capitalization-weighted index of 40 companies listed on the Paris Bourse. The FTSEurofirst 300 Index comprises the 300 largest companies ranked by market capitalization in the FTSE Developed Europe Index. The FTSE 100 Index is a share index of the 100 companies listed on the London Stock Exchange with the highest market capitalization. Established in January 1980, the All Ordinaries is the oldest index of shares in Australia. It is made up of the share prices for 500 of the largest companies listed on the Australian Securities Exchange. The S&P/TSX Composite Index is an index of the stock (equity) prices of the largest companies on the Toronto Stock Exchange (TSX) as measured by market capitalization. The Hang Seng Index is a free float-adjusted market capitalization-weighted stock market index that is the main indicator of the overall market performance in Hong Kong. The FTSE TWSE Taiwan 50 Index is a capitalization-weighted index of stocks comprising 50 companies listed on the Taiwan Stock Exchange developed by Taiwan Stock Exchange in collaboration with FTSE. The MSCI World Index is a free-float weighted equity index that includes developed world markets and does not include emerging markets. The Mexican Stock Exchange, commonly known as Mexican Bolsa, Mexbol, or BMV, is the only stock exchange in Mexico. The U.S. Dollar Index measures the performance of the U.S. dollar against a basket of six currencies. Additional risks are associated with international investing, such as currency fluctuations, political and economic instability, and differences in accounting standards. This material represents an assessment of the market environment at a specific point in time and is not intended to be a forecast of future events or a guarantee of future results. MarketingPro, Inc. is not affiliated with any person or firm that may be providing this information to you. The publisher is not engaged in rendering legal, accounting, or other professional services. If assistance is needed, the reader is advised to engage the services of a competent professional.