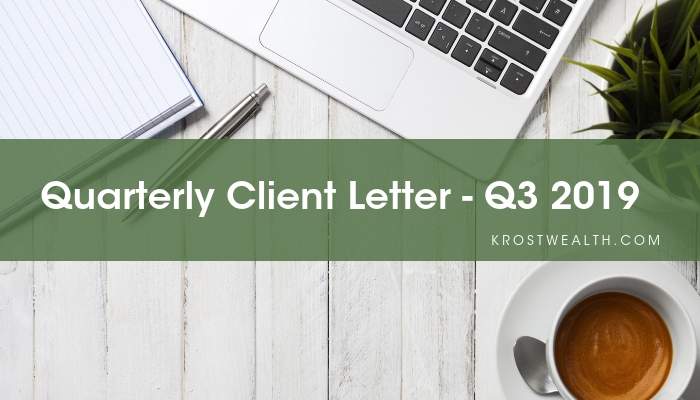 The US-China Trade Deal, Student Loan Debt, and Other News from the Last Quarter.

On my screen, almost everything has made money this year except short commodities.

If the debates taught us anything, it was that concerns over the US-China Trade Deal The news was flooded with hot dispute over whether the conflict would cause a mass decline for both countries. However, according to BTN research, since the White House increased tariffs on $200 Billion in Chinese imports from 10% to 25% on 5/10/19, the S&P reached 6 all-time highs.1

The Federal Reserve (Fed) kept interest rates flat for the 1st quarter but signaled possibly lowering rates as early as July. I opined in my last letter that this was “off handed,” and I think I got that wrong. There is significant support for lowering the fed funds rate by the Fed, effectively lowering rates across the board, from savings and money markets to mortgages and credit cards. Historically, the Fed considered lowering interest rates when the economy showed signs of weakness. In this case, it seems the Fed is more interested in keeping the current bull market going, as CPI (Consumer Price Index = inflation) showed a 1.7% annualized advance vs. 2.8% last May. One half of the Fed’s target is low unemployment. In this case, we saw a 3.6% unemployment rate for April and May although job growth does seem to be slowing. Consumer spending was good at .5% in May, retail sales were up .5%, personal incomes were up .5%, and the economy grew 3.1% in the first quarter.2

While a lowering of key interest rates may signal recessionary times, it does the opposite for bonds. As rates lower, the value of higher paying bonds, both corporate and government, will rise as secondary markets pay up for the increased yields. However, in bull markets, bonds will usually be under priced as opposed to more risky stock investments as investors try to time equities. Nevertheless, a diversified portfolio should have a consideration for fixed income, no matter how bullish an investor may be.6

A very hot topic in the presidential race has been the ballooning student loan debt crisis, as student loan debt doubled in the US since 12/31/2009 and quadrupled since 6/30/2005.3 Studies show an education is not always a great investment as 57% of millennials regret taking out as much in student loans as they did.4

• The number of publicly listed companies traded on a stock exchange has dropped from 8,090 to 4,336.3
• Earnings season. I am interested to see how both financials and utilities perform with an assumed rate decrease.