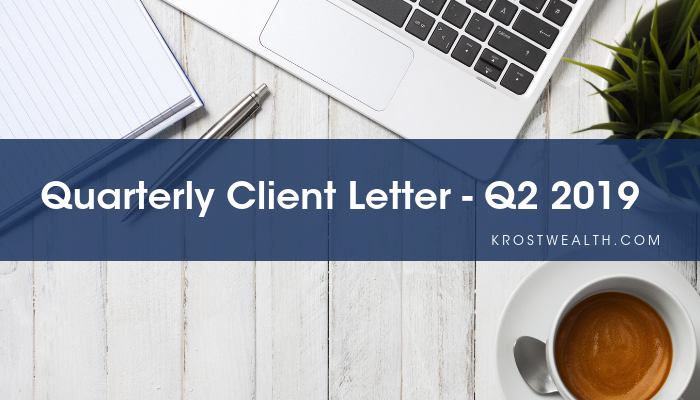 As we look toward the summer and seasonal change, there is much to reflect on from this last quarter.

The first quarter S&P price return was 13.07%, the best first quarter since 1998, which followed one of the worst Decembers to date after a mediocre equity market in 2018. Many investors who ran for the hills following an almost 15% downturn, missed out on a historic rebound in the first quarter that recouped the majority of losses from 2018. There continues to be a lot of talk about whether the 2018 Tax Cuts and Jobs Act is producing the economic growth many expected. The majority of filers that I have reviewed had a net decrease in overall taxes paid in 2018 vs. 2017. What we don’t know is how much of those tax savings are going back into the economy.

A recent CNBC poll shows that 70%1 of poll respondents allocated tax savings to stock buybacks and 60% have allocated to new buildings and software/IT. Buybacks are terrific for investors but not helpful in the economy, while IT investments (assuming domestic IT companies are used) can be accretive to GDP and a better economic investment in the infrastructure of the firm. Some people believe buybacks are “cheating” by lowering the outstanding shares in the market, thereby artificially increasing the price of the remaining shares. Cheating or not, it has led to significant price increases in certain sectors this year so far.

The Fed Resists a Raise in Rates

Again, following comments from Chairman J. Powell, the Federal Reserve resisted the urge to raise rates this quarter. As a reminder, the Fed will normally raise rates in times of prosperity and GDP growth, and lower in recessionary periods. In late March, Chicago Federal Reserve Chair President Charles Evans said he would consider lowering federal rates if downside pressures continue, which threw the news outlets into a flurry asking if the country’s economic position is worse off than believed. In my opinion, this was an offhand comment and should not be taken seriously. We have seen robust but normalized GDP growth, historically low unemployment, and inflation reigned in as part of the Federal Reserve’s plan.

The Fed continues to lower its balance sheet by not allowing billions of maturing bonds to be reinvested but has slowed that number from $30B to $15B.

If at some point in the next few years we enter a recessionary period, the Fed may have little affect using monetary policy to fight GDP decline (lowering rates fights GDP decline). If we continue to keep rates low we will have no leverage to lower rates should we see an economic downturn.2

Earnings season is well under way. Retail sales look good for the first quarter, but the same cannot be said for healthcare, financials, and tech all on tap. If we see strong earnings, that may be a bell weather of a continuing strong market. If earnings disappoint, that may be a sign of slower growth in GDP. Summer is usually a difficult equity market to predict with the old saying “Sell in May and go away” having little modern meaning as the market has recently seen positive growth between May and November.

That’s all for this quarter’s update, but in the meantime, be sure to visit our website for our monthly economic update and other resources you may find useful. Have a wonderful Memorial Day!