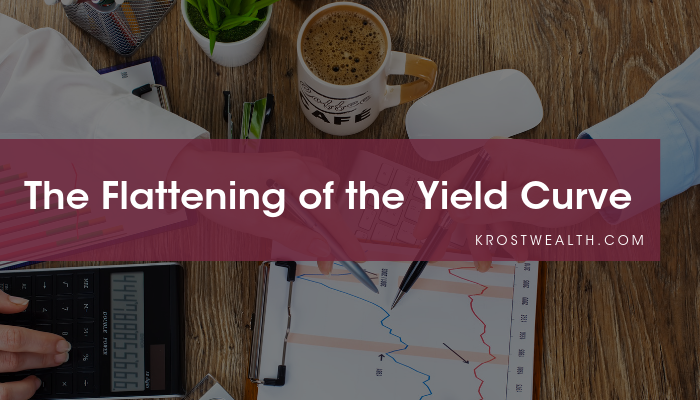 What is the yield curve, and why is the financial media writing about it? Here is a brief explanation, starting with a clarification.

A yield curve is really an X-Y graph projecting expected rates of return for equivalent-quality bonds with different maturity dates. But it is not just any yield curve that matters. When investors, commentators, and economists talk about “the yield curve,” they are talking about the graph plotting the interest rates of Treasuries: 3-month, 2-year, 5-year, 10-year, and 30-year notes. The “curve” is the line connecting their projected future yields. This Treasury yields snapshot is authoritatively referred to as: “the yield curve.”1,2

The yield curve normally slopes upward. (Think “rise over run.”) In other words, the projected yields on the short-term Treasuries (at the left of the X-Y graph) are small compared to the projected returns on the 10-year and 30-year Treasuries.2

When the economy is booming, the slope of the yield curve is often steep. A thriving economy typically has significant inflation, and when investors see rising inflation, they assume the Federal Reserve will start raising interest rates. That belief leaves them cold on longer-term bonds, so the prices of those bonds begin to fall, and their yields correspondingly rise.2

Right now, the 10s-2s gap is being closely watched. This is the difference between 10-year and 2-year Treasury yields. It has been steadily declining since December 2015 (when the Fed began tightening), and it narrowed to less than 0.5% this spring.2

Looking back over the last half-century, the 10s-2s gap has slimmed to less than 0.5% five other times, with an inversion of the yield curve – and a recession – following each time. Those recessions took time to arrive, though. On average, they began nearly two years after the yield curve inverted.2

Wall Street analysts have noticed a relationship between bear markets and recessions – the former tends to herald the latter. As some study the flattening yield curve, they not only see a recession risk, but an accompanying risk of a stock market downturn, as well.2

Could their fears be overblown? As MarketWatch noted, the flattening yield curve has been promoted by pension funds buying up greater quantities of zero-coupon Treasuries. The Fed, too, may have affected things due to its quantitative easing and ongoing forward guidance.4

Is a flatter yield curve a new normal, as former Fed chair Janet Yellen argued in 2017? She felt the latest gradual flattening was actually a product of a changing relationship between the yield curve and the business cycle. If that is correct, investors could worry a little less about the Fed’s determination to maintain its pace of rate hikes. (Its latest dot-plot projects four interest rate increases in 2018.) The New York Fed recently put the chance of a 2019 recession based on the slope of the yield curve at 11%; in comparison, the chance was 40% on the eve of the Great Recession.3,5

If the flattening of the yield curve concerns you, you may want to take the time to consult an investment professional and work on a strategy to contend with the possibility of a recession or market downturn.

This material was prepared by MarketingPro, Inc., and does not necessarily represent the views of the presenting party, nor their affiliates. All information is believed to be from reliable sources; however we make no representation as to its completeness or accuracy. Please note – investing involves risk, and past performance is no guarantee of future results. The publisher is not engaged in rendering legal, accounting or other professional services. If assistance is needed, the reader is advised to engage the services of a competent professional. This information should not be construed as investment, tax or legal advice and may not be relied on for the purpose of avoiding any Federal tax penalty. This is neither a solicitation nor recommendation to purchase or sell any investment or insurance product or service, and should not be relied upon as such. All indices are unmanaged and are not illustrative of any particular investment.